I Abandoned Nvidia for My Ham Station Computers

I use Ubuntu on my Ham Shack Computers, and have recently installed the new revision 12.04. All of my Ham Applications seem to work much better with this new release, the sound system seems to work predictably and correctly.

But, I gave up on graphics, after several days of frustration trying to get my Nvidia G7000 Graphics Card to work in the 3D mode on Ubuntu (see previous post).

I decided to try to replace the "Nvidia Graphics Card" with my Son's discarded and dying "ATI Radeon HD 5450" graphics card. A little repair of the card's fan and a little micro surgery was necessary to bring the "ATI Radeon" roaring back to life.

I installed the repaired ATI Radeon card, rebooted and it worked as expected in 2D mode. I then installed the suggested Drivers, and rebooted, - it just worked!  -  No hassle nor pain, Ubuntu graphics now runs in the 3D mode!

After much research, I found that; due to lack of manufactures supported or open drivers, the Nvidia Cards are not well supported for use with Ubuntu. For my other system upgrades, I am going to abandon Nvidia in favor of ATI.

I really like the new 3D Graphics menus and workspaces!

Note: The menus do not actually appear in 3D, but Ubuntu does use the graphics card's 3D processor to quickly and dynamically display the menus and workspaces. In 2D mode, some functionality is not available.

Last weekend my Son, requested help installing Ubuntu on one of his old Laptops and an old Workstation. He has only used MS up until now. I have always used some flavor of Linux for most of my systems from the beginning  (as far back as Minux). For my Son, I suggested Ubuntu as that is what I have been using for the last few years, and it is easy to admin!

I have been using Ubuntu 10.04 LTS since 2010 (as implied by the Rev Number). The LTS suffix means that the Rev has what is called "Long Term Support" from developers. I like LTS as it is more likely to be stable. Because I am mostly satisfied with my Ubuntu installation, I had not kept up with the latest news of additional releases. But, for my Son new installations I wanted to review the latest available release. To my pleasant surprise the current Rev of Ubuntu is 12.04 with LTS.  I should have known as it is a even numbered release. For those that do not know, the first two digits of the Rev number is the year and the last is the month. The developers plan is an LTS for each even numbered year.

To me this is good news, I could install Ubuntu 12.04 on my Son's fresh wiped systems, before I would have to figure out how to do the same on my established systems.

We downloaded the ~700MByte Ubuntu 12.04.1 ISO file, to my Laptop and proceeded to transfer the file to a USB  thumb drive. But we could not get his older workstation to boot from the USB. The solution should be simple; transfer the image to CD, but that did not work, the image is larger than a CD. A DVD is necessary, but that is OK as my laptop contains a DVD burner. The image was transferred onto the DVD, but then that did not work as the Workstation and Laptop could not use the image written at high speed. With some research,  the recommended speed was below 4X. A new DVD was burned at low speed. The Laptop install process was a little slow, but going well enough that a second DVD was burned to use with the Workstation. The Workstation was much faster than the Laptop and finished first. We then had fun playing and admin'ing the two new systems.

That night when I got home (about 10pm) I decided that was easy and therefore I should update my (established) Laptop. It would not be a fresh install, but an update, preserving as all of the user data. At about 3:30am when I went to bed,  I had still not completed the task. The next morning all went well and now I have a Laptop running Ubuntu 12.04.1 LTS.

I tried to do the same with one of my Workstation, to make a long story short, I attempted to update the system twice and scratch installed it four additional times, my user data was on another disk and therefore a install was not a great lose. In general, the problem and answers were: Build from DVD and not try to use an USB, the NVIDIA video card that the Workstation contains is not supported very well. Ubuntu 12.04 uses what is called Unity for windowing, the menus and workspaces are best viewed in the 3D mode, NVIDA 3D is not currently supported by Ubuntu. 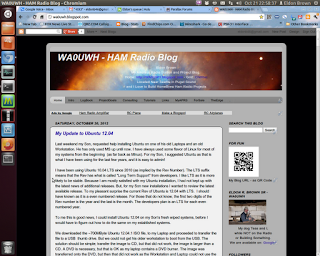 But, after many hours, I have Ubuntu 12.04.1 on two system, and to my surprise the major thing that I have always complained about Ubuntu, appears to be FIXED. Before at rev 10.40, the "sound" system seemed to never worked right, now it seem to just work -Yeah!

Sixty five days after landing, "Litter" was photographed on Mars.

The JPL crew is trying to determine the litter's origin. They are assuming it fell off of Curosity, and wondering "how or if " system integrity has been compromise. Read the full story here or see a video (mov) here.

It would be interesting to know if it was dropped here by Curosity, or debris scattered here as part of the Landing 65 days ago.

Remember on Earth, the rule is:
Pack it in - Pack it out!

I will get back to "Ham Radio Blogging" soon, I have several projects in the works, two PCB's being manufactured, and currently having fun attempting to gennerating PSK31 with the Prop.