Jeff - KO7M and I have been working on several Arduino and Teensy projects, to control QRP and Beacon Transmitters. To expand and progress to the point where we will use raw chips in planned projects we decided to produce a Teensy Programming (under) Shield. For several projects we have used the Teensy as the development platform.

The Teensy will plug into the top of the Shield. After several iterations and corrections of schematic I we have a layout.

Today, I used the Toner Transfer Method to create the board. High resolution two sided boards are tough but they can be done. The Teensy Programming Shield is .75" x 1.75" with 8 mil traces.

There are not many traces so it was not hard to route or build. If I had need for more than a few boards I would have sent it out for FAB.

After Laser Toner Resist is remove, the board is cleaned and polished, and then placed into a small dish of Tinnit. In about 5 minutes the board is bright and shiny.
The Results:

Double sided HB board are difficult as the socket pin are typically used to transfer the traces between sides and therefore both sides of the socket pins require solder. With care this can be done by raising the socket a small amount and soldering with a very sharp iron. Also, small errors of alignment between the image of each side make for difficult drilling and therefore pad are not always centered on the component pins.

Cut, Drilled and Parts are loaded, in this case Headers and one jumper.

As you can see the Header were raised about 1/10" to facilitate top side soldering the few pads which are connected via traces. Raising the parts would not be necessary if this board was from a FAB shop, plated through holes would make loading parts much easier.

In use, the Teensy will cover the first 24 pins (far end), short jumpers will be used if need for the none standard Teensy pin locations. For ISP Programming effort, only one jumper will be required - the RST pin.

With the Teensy plugged in hopefully there will be enough space to plug in the programmers? To use the Shield to program the Teensy, a short jumper is still needed between the RST pin (on end of the Teensy) and the third pin on the near open socket holes. That hole, is connected to the RST pin on the 6 pin Programming Header. We could have included dedicated RST pin and socket as part of the Shield, but that would require we alter the Teensy with a dedicated pin, disallowing it to be used directly with simple circuits on protoboards.

Now it is time to do some Direct AVR Programming - Jeff!

Finally, Jeff - KO7M and myself got together to work on my Tennis Ball Launcher Trigger Program (see previous post). The launch trigger program will help avoid accidental firing of the launcher. The launcher, of course, will be use to string antenna lines into the trees. So far, the weighted tennis balls have been shot over 160' trees. Tess, my dog loves the launch activity!

Jeff came prepared with his subroutines to perform most of the required functions. Our time together was used to assemble the mainline program and test the firing sequence functions. My Teensy Test Jig as describe in previous posts, was used to test the program. A few things are yet to be resolved, but progress was good.

An unanticipated value; was the opportunity to watch over Jeff shoulder, as he programmed the task in the Arduino IDE. A lot can be learned by watching a programming Master - Jeff is good! (it is his day job) The interaction is worth much more than just the resulting program listing.

The lessons learned will be used in my future embedded micro projects. - Thanks, Jeff

Here is the Teensy Test Jig Schematic that I am using for the programs shown in previous posts.

Note: The Rotary Ecoders are show as "Trimmer Pots" with two extra pins at the top for the push button switch, the encoder part is not available in the Fritzing Library, I may need to create a custom part. I have updated the Fritzing diagram above - I had to build a custom Fritzing Rotary Encoder part.


I had to re upload the schematic, the first and second were flawed.

Note: The Photo, Schematic, and the Fritzing view are NOT all "exactly" the same.

This is a "work-in-progress" project.

If you follow my Blog, (see previous posts) you will know that I have been playing with an Arduino work-a-like known as the Teensy. The plan is use it to help make my Homebrew Projects smarter and maybe more interesting.

So far, I have been "playing" with it to build multi-tasking template for future projects. The first hurtle was to write a predicable Rotary Encoder Test routine. Which I have done and published on the previous post. Actually, the code that I published has been replaced three time as I learn more. Finally I think the code is solid and would not mind others to commit or post reviews.

It was a struggle getting to this point. I have several chats with my friend Jeff - KO7M, about several major issues that were . . . just kicking my butt. The program just did not operate the way I had in mind. But in the end, it now works better than expected.

There were several lessens learned along the way, many are simple and probable known by heavy software types, but for me they were large stumbling blocks.

The methods used within the test program, have already been incorporated into another more complex multi-tasking program that I am working on.

The following is an excerpt from that program:
It will be just more fun stuff.

This Rotary Encoder Test Program is archived here, and available for review. Actually, I am using a Teensy 2.0 for this effort.

Skip this post, if you are not into Arduino Programming. 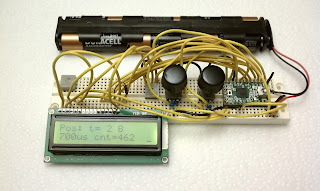 Here is my Arduino Encoder Code for my archive, and others to review.

One interesting observation, there are two interrupts for each detent of the Encoder, rotating the knob very slowly will show an interrupt half way between the detents. The Encoder doc's do not imply this should be expected. Maybe I have the wrong doc's??

This interrupt handler works, it is my adaption of the published (original) code which is shown further below. I just futzed with the code to remove problems that I observed. I do not understand all that I know, maybe I just need more futzing.


The following suggested Handler does NOT work for my simple Encoders.

The Setup is just three lines:

The Encoder Interrupts accumulate in "encoder0Pos", The shift (>>1) divides the value by two,  which is necessary as I want to count "detents" and there are two interrupts per detent. Setting "encoder0Pos" to zero, indicates all Encoder Interrupts have been accepted. Note: there is a very narrow window between these statements where a Interrupt could be lost, which is not big deal for my app.

Decoding a Rotary Encoder is more difficult to use than I had thought. My test environment for the encoders is as described in the previous post.

A google search found several articles describing the problem, suggested solutions all seem to be less than optimum.

One problem may be that I am using less then optimum quality encoders, they were purchase on ebay for about $1.60 each. A quick search of Mouser Catalog lists many similar parts at the same price. Each have the same 20 (or so) pulses per revolution. Expensive (>$50) optical encoders typically have many more pulses per revolutions (>128) and therefore should provide more resolution. I don't think my projects require that much resolution (or expense).

I am going to check my car radio's volume and channel controls,  they seem to feel right and would be usable for most of my projects.

Of course, this is all necessary if the encoders are to be used in my future QRP projects. I am sure there is a workable solution, I just have not found it, yet!

It has been several years since I have programmed a PIC or other Micro Processor. The following is a quick build to provide a test circuit for getting back up to speed. The processor is the green circuit board on right side of photo. It is a Teensy 2.0 , which is a Arduino look/works-a-like.

The connection to the PC for programming and interaction is via the mini-USB. Power is supplied via the USB or external battery as shown here.

Add on software allows the Arduino Interactive Development Environmental (IDE) to work with the Teensy. In fact most Arduino Sketches (a C like program) run without alterations. I chose the Teensy because of it small size,  it is similar in size to my normal projects.

The Sketch that I have put together is to test and exercise of these parts. It is a simple multi-tasking Scheduler and State Machines. My goals is to develop and provide a simple template for my future multi-tasking Sketches. I plans to merge the Arduino or Teensy with my micro 9-Volt Transmitters (as previous posted) to create interesting more complex projects.

The two Rotary Encoders (center photo) are not completely hooked up yet. My plan is to use Interrupts to decode their input.

As seen by the photo, several tasks (4) provide sample text within several fields on the two line display and controls the LC BackLight Brightness. So far, the multi-tasking Scheduler and State Machines are working as planned.

I wrote several macros to implement Task Switching, Checkpointing, and Scheduling. I remember doing something similar in Assemble Code many years ago by counting clock cycles. These implementation in C was easy in comparison.

No, it is not a full featured multi-tasking Scheduler implementation, but it will do the multiple tasks/things that I require.

UPDATE
There appears to be an old and raging debate about the use and license of the Teensy and it's bootloader, see:

I do not know the current status of the concerns?