On some of my projects I have used a DS3231M Realtime Clock (RTC) which needs a voltages supply to maintain itself during equipment power down.

The 3012 Coin Cell Clip is small, easy to install, and use.  The two small solder tabs are used to attach the clip to the PCB

The exposed clip is positive (+) and a user supplied pad on the PCB is negative (-).

An example of usage and required negative pad can be seen on the DipTrace 3D layout.

The clip will hold a CR1632 3.3Volt Cell. Other clip sizes are available to fit other batteries.

Note: The included links are to Mouser pages, but other vendors may have the same part. Other sources can be found via FindChips. I am not associated with Mouser, I am just a happy user.

I have been trying to find the part number of the Crystal Pin Socket for the Propeller. I want to use similar pin sockets for my small add-on Huff-n-Puff TCVCXO daughter board (see previous posts).

My daughter board was designed to fit existing holes on the Propeller Protoboard. Three of the five pin (holes) already have the correct Voltages/Signals present ( +3.3v, GND, and Xtal Input), only the two I2C lines will be jumpered as necessary.

Use of the very short Crystal Pin Socket will allow for a very low daughter board profile. In the past, I have used salvaged machined DIP socket/pins that stood up about 1/10 inch above the board, their hight make the daughter board a little wiggly.

I asked the folks at the Parallas Propeller Forum if anyone could provide the exact part number that was used in production. Several user suggestions were provided, and then with a lot of minuet specs comparing, I think I have found an acceptable part - I now have several on order.

Only receipt of the order will confirm. Note: the photo suggests the part is longer than its specs (perceived aspect ratio) . The part fits into a 1.0mm hole and its over all length is only 3.61mm. The Pin Socket accepts a 0.51mm wire pin, similar to those found on small crystals, at 0.47mm dia (measured).

This will be a great (but very small) part to be added to my collection, for this and future projects.

I enjoy chasing/tracking down "small and interesting" parts for my projects. I have blogged about many other parts in the past, maybe it is an expression, or a long lost need, of a "hunter/gatherer". I may make this a re-occurring theme on my blog - Part Quest.

I received my TCVCXO PCB back from OshPark.com (see previous post) This board with be used with the Parallax Propeller as a Crystal replacement. It is a Tiny board, only 0.365 x 0.650 inches (0.062 inch material). The PCB layout for this project was created using the DipTrace Schematic Capture and PCB Editor.

I attempted to take photos with the same origination as the previously posted 3D models (which proved to be more difficult than I thought :-) Here is the results. More "Light" is needed - I think I would like to build a "photo shoot light box" for taking future photos. 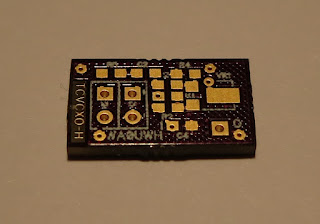 Now it is time to load and test this thing.


UPDATE:
OK, now I am envious, I just read Dave Richards -AA7EE,  post of his gorgeous Photos of the Air Variable Capacitor. Thanks Dave, I learned a few things!

It has been a grueling 18 days since my last post. The Propeller UI Board that I have been working on has provided some real challenges. All of the UI Board peripherals on wired to the same I2C Bus. Which means my standard method of debugging the code via a working a Display was not available. The Bus Pirate and a new VGA Display was necessary, which had to be configured which added to a already steep learning curve.

Coordinating and developing the Objects for the six UI peripheral was a challenge The task was a little easier thanks to Jeff - KO7M, who helped with the I2C Bus to Parallel Expander Code, and the necessary modification to his I2C LCD Driver.

Currently ALL six UI peripherals, which are on the same I2C Bus, are working in concert with each other without perceivable delays for; the two Rotary Encoders, four Push Buttons, eight LEDs, a Realtime Clock (RTC), and the LCD Display. Also there are the Sound (beeper) and the three I2C POTs that control the LCD Backlight Brightness, LCD Contrast, and Sound Volume - all working seamlessly together.

One of the Software Driver Goals is make moving the Programmed Display from LCD to VGA (and back) without difficultly, other than the obvious which are the Number of Lines and Number of Characters Per Line.

Note: my new I2C Huff-n-Puff board (see previous blog) will also be added to that same I2C Bus (external to the UI).


I had to learn a few new Propeller SPIN tricks to make it all work. Specifically how to coordinate and use "Locks" for Objects and COGs.

Only a few modifications were necessary to the UI PCB. I have already started the re-design with modifications for the next PCB. I will be adding more Pull-ups, and 0-Ohm Jumpers to make separation of circuits easier for future development and debugging.

I have several ideas and better organization of the current code, but that will wait for another day.

It has been a lot of fun. Now on to some projects that will use the Prop UI Board.

First, on the list to port are; my QRSS and WSPR Beacons, Jeff's Keyer, the Huff-n-Puff Freq Standard, and several other Prop Projects that are planned to use the new UI.