This is post not about Electronics, it is a RANT about FORD.

For the last few weeks, my Son and I have been working on his F350 6.0L Diesel Engine, to replace; the Exhaust Gas Recirculation (EGR) Heat Exchanger, and the Oil Cooler. This work is a pain because most of the top of the engine, including the Turbo Charger has to be removed to get to the parts being replaced. There are several good Youtube video showing the details.

We ordered parts and gaskets bases on information available. This repair is somewhat of a difficult task due to engine compartment large size and the long reaches necessary to access everything.  There is one very dirty mess when the Oil Cooler cover is removed, where about a quart of oil spills over the engine valley, but that cleanup marked the beginning of the actual part replacement and rebuild.

Most of the previously dis-assembled parts where replaced in the order they were removed without difficulty.

On top of the Oil Cooler Cover there is a small assemble which is held in place with two screws within the Oil Filter Case (Can). This small assemble is about 3 inches wide.

This small assemble holds two valves; one to Drain Back oil from the Oil Filter Case (helpful during oil and filter changes), and the other is the Oil Cooler Bypass Value (OCBV) which opens in case the Oil Cooler get clogged up. These two valves are very simple; the first is held shut by gravity and can pressure; the other is a spring loaded Brass Plunger with a small flat plastic/rubber (of some sort) washer (flapper) that opens at 25lbs of Oil Cooler pressure.

According to FORD, these two small values are NOT replaceable parts !!

And therefore, normal Auto Parts stores do not have the parts, nor does FORD.

Our OCBV plastic/rubber seal is damaged, and the Brass Plunger is scored showing that it had failed long ago.

The values can only be replaced with a NEW Oil Cooler Cover, which is about $180.00, the plastic/rubber part, if available, should only cost about $2.00, even though it is about $0.10 worth of plastic/rubber.

I suspect that the OCBV failure contributed to the EGR Cooler failure and therefore the need to repair this engine - it is a $0.10 part ?

Our current plan is to create a new Teflon washer (value flapper). A Teflon rod is now on order. Experiments with different on-hand materials failed to hold up in a gas/oil environment.  Teflon appears to have the right properties; inert and high temperature resistant.

Thanks FORD, my Son's truck has be on blocks for about three weeks now, while finding a workable solution.

If this works as planned, I will be selling Teflon washer, and or Teflon Plunger with integrated Teflon Value seat, . . . soon :-).

Update:
The engine has now been running with the new Teflon Value Seat for several weeks, when the oil is changed it will be removed and inspected for ware. 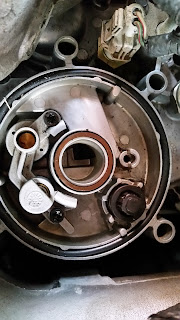 Here is a photo of the Bypass Valve Assembly reinstalled ( I had forgotten I took this photo). The Oil Filter Tower and Canister have not been reinstall yet, as can be seen, two screws hold the assembly in place. Inspection for ware at the next oil change, will be easy.