As part of a group project, a lot of the members of the Puget Sound QRP Group (pQRP) are building the "Softrock RX Ensemble Kit" for our group exploration of Software Defined Radios (SDR).

As reported in a previous post, I had a false start of my build while at Salmoncon. My goal was to get it started, finished and tested before leaving the event, but that did not happen. With more time now, I plan to continue the project.


Wednesday night, while at our last pQRP P&C (Pie and Coffee) Meeting, Alen asked a few questions about my build process and progress, he asked;

Could Reflow Techniques be used to build the Kit?
What size of Soldering Iron should be used?
As per the instruction, I have the 12 Volt Power Supply, USB, Local Oscillator (Si570) and Control Circuits installed. The next steps include; down loading Firmware to the PIC, loading Software onto the PC and doing some initial tests for proper oscillator operations. I just need some time to do the tasks.

At the P&C meeting, Charlie - took the following incredible photo of my partially completed board. Note, this photo was taken with a hand held camera while setting at the table, with the board propped up on a coffee mug, a setting sun beam provided the light. 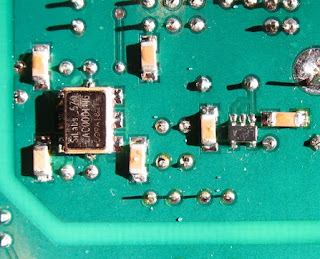 If I had known that a photo was going to be taken, I would have cleaned the board with alcohol, to at least remove rosin splatters. I am looking forward to a completed board photo.
--

Today is the one-year anniversary of this Blog, it was started on July 23, 2009. This entry is the 120th - that makes an average of 10 entries per month. About 4900 unique reader have been logged for the year. None of this was part of a goal, but only the results.

My Goal for this Blog was to provide a place to capture my Ideas and Links for my HAM Radio Operations and Projects, but maybe readers have found something entertaining or informative.

This first year was with some "Ups" and "Downs", but only some of the "Ups" will be highlighted here, in no particular order.

My Marker Beacon Family Photo
A fun 30m Dipole Insulator QRSS Transmitter Experiment and Die Hard Test
An Interesting Signal Hunt
From one of the re-occurring therms it is obvious that I still need to learn the Code faster
This is my entry for Bill Meara's of SolderSmoke.com fame, "ET Phone Home - Work a Like" contest.
Here is my Heroes List
I enjoyed hosting the eBuild-a-thon and BBQ's, maybe I will be able to do it again.
I have a real interest in small trace HomeBrew circuts

Email ThisBlogThis!Share to TwitterShare to FacebookShare to Pinterest
Labels: HighLights


This is a late posting of our Puget Sound QRP SalmonCon weekend of July 9th, 10th and 11th.

I went to Salmoncon with the idea of working some QRSS and WSPR on my IC-730 in the fresh air and camping environment. Most attendees were there to work SSB and CW with a little PSK, and attend the technical lectures. There were two or three K3's, an SDR, many other commercial rigs and some HomeBrew equipment all available for use.

I also, took the parts and projects of my QRSS and Marker Beacons along with my intended project to put together - a "Softrock RX Ensemble Kit". My goal was to get it started, finished and tested before leaving the event - Boy, was I wrong! - I should have known better.

The technical talks where very interesting, entertaining and occupied most of the day. Afterwards, chatting with friends about HAM Radio occupied the evening. There were too many great conversation to enjoy and with so many people with ideas and experiences to attend.

I finally settle down to do some real "Kit" building. The "Softrock RX Ensemble Kit" represents the project that I have had on my minds drawing board for several month as a HomeBrew project. When this Kit was found and revieled it's block diagram and schematic, I just had to have one! The HomeBrew Project I was planning was the same, only I did not have all of the parts and values worked out - this Kit is Great!

I worked for the next hour taking that one part out, I did not want to damage the board - so I worked very carefully. Unfortanatlly, I did not take my PCB vice with me on this trip. Removal of the "one" part was difficult - holes are small and I wanted to salvage the part. The part was removed and the board was not damaged or marred.

Afterwards, I decided to plan on a new replacement as the top of the diode hairpin loop is a test point that will be used later. The old cut part would not work and provide the test point in the right part of the circuit. Note: the photo shows the correct installation from the manual page.

This set back, dampened my spirits and killed all hope of getting this Kit on the air during Salmoncon. I decided to abandon the effort, and wait until I return home with more time to work the problem.

This is now July 20th - I have not returned to the Kit yet, but maybe soon.

BTW: I now recommend that you read ahead in a kits construction instruction manual - I wonder if I can follow my own advice!

The Trip to Mt Pilchuck

Yesterday, Jeff - K07M, and I went to Mt Pilchuck as planed in the previous post. The road into the selected spot was reasonable, with the standard large mud puddles but mostly dry. The one bad spot on the road-spur was a short run of large down-slopping moguls near the end. Going down the moguls is easy, coming back out will be fun.

On the way in, Jeff related a poem that one of his relatives kept to remind himself of his work and adventures on the long rugged Alaska Highway - similar to the road-spur that we were on;


Winding in, and winding out,
Leaves my mind, in serious doubt,
As to whether the man, who built this route,
Was going to Hell, or coming out.
by: Troy Hise, a pioneer on the Alaska Highway
(as per Google)

When we arrived around 11AM, the up-slope fog was damp, chilly, and obscured the view. 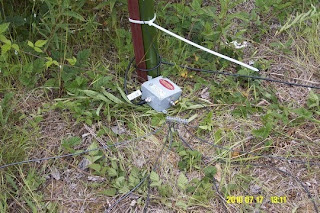 The first activity was to erect Jeff's fiberglass 42 foot vertical and cut and install six, 60 foot radials. They were laid out only on the east side of the base, because the brushy cliff side did not provide access. Jeff used a 1:4 balun at the feed point.

We now have a long pointed wire sicking straight up, on a landing, at the edge of a cliff, I remember thinking; "what would I be doing if I wanted to attract lightning to this place? . . . Nah,   just don't think about it!"

It is hard to see, but the 42 foot vertical is shown in the next photo (upper left), on the edge of the brush which is near the edge of the 1000 foot cliff. We had to find a place where there was enough top soil into which we could drive the "T" post support.

Note: only on the "Terrain" view of the included google map link is the significants of the cliff shown (see upper right display mode on the map). 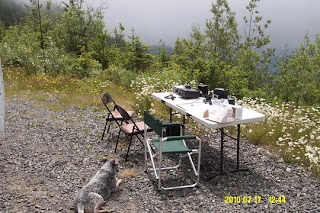 The operations table was setup and my IC-730 was connected to the 12 Volt battery and the vertical, which by the resulting sound, provided a promise of good contacts.

The other 30m vertical (with 4 radials) was installed and Jeff's other radios were connected for some serious radio work - or for us just setting in the fog. 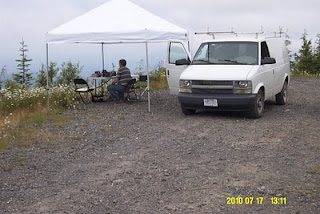 About an hour after arrival, the fog thinned, the sun came out, and it was too hot to stay in coats, and without a sun shade. We installed a pop-up cover, and spent the rest of the day chatting, working the radios, and looking at the Breath-Taking View.

Late in the day we had a few Bugs, but very tolerable.

Jeff is much better than I at this "contact and contest" stuff, as I normally use my radios for impersonal digital QRSS and WSPR work, where the computer does most of the control. 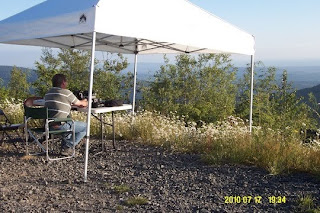 Via his Yaesu FT-817, Jeff reported our GRID square (CN98bb) for several local pileups on 6 and 2 meters. On other bands he worked other spots around the world, using only two watts (I think).

Next time we will plan to instrument the battery-use better.

Tess, my dog, enjoyed the trip and spent most of the day guarding and playing with her Tennis Ball, only occasionally diverting her attention to alerted us to hikers or campers coming down the road. 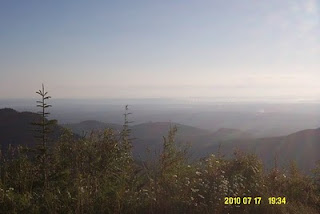 I think we packed-up and left for home about 8PM - it was a Great Day in the Sun, with Radios, and a Great View. These photos do NOT do this location's view justice.

While leaving, driving back up the moguls was not that bad, but it was necessary to carefully drive the crests.

Note: the included QTH/GRID map links are provided by the good folks at http://no.nonsense.ee/qthmap/ - Thanks.

A follow-up e-mail from Jeff to our pQRP group:

Sorry for the late posting, but I had a great time up on Pilchuck last Saturday. We set up at the 2600' level. I brought my FT817ND and eldon had his IC730. We had two verticals, Eldon's copper pipe vertical that he brought to Salmoncon and my fibreglass 43' pole.

The bands were not bad at all and the location was super. We had an operating station with nearly a 180 degree panoramic view of the valley to the south-west. The day started in the clouds but as the morning wore on, the clouds subsided and we had a gorgeous, albeit hazy view.

My operations focused on 17 and 20 metres earlier in the day an then switched to 6 and 2 metres in the afternoon. We were a hot commodity given the grid square (CN98BB) for the VHF contest going on that same weekend.

First contact was my neighbor, Jeff W7BRS in Fall City. He was booming in on 20 metres. I then worked the USS Midway in San Diego on 7 watts on 14.325.

All-in-all a great day out. Thanks Eldon!

A copy of an e-mail that I sent to my local HAM Friends:

On Saturday July 17th, I am going back up onto the side of Mt Pilchuck to try some radio operations.

The view from the Pilchuck's overlook is fantastic, if you have never flown in a small airplane - this is as close as it gets!

The drive to the upper parking lot (at 3200ft) is a little dusty/dirty but easy, this overlook provides views to the Northwest-and-West, but with Bugs.

To get to the slightly lower (at 2600ft) overlook that I plan to use, the road is a little rougher and a low vehicle is not appropriate. But the full view is from this location is North-to-West-to-South, and with NO Bugs (without wind or at least yesterday when I was there).

I plan to leave from Granite Falls McDonalds (west of town center about 4 blocks) at 10:00AM - if I remember it is about a 20 mile drive from there.

Bring Radios, Antenna Materials, Camera, Binoculars, Lunch, Windbreaker, Sunblock, Bug Spray (hopefully not needed) and come join the fun. It is not a Real Field Day, but it is in the Sun, with Radios, and a Breath-taking View - what more could you want?

Note: it would be fun to try some Laser Communication with someone down below!?

Please let me know if you can join.

Note: the top of Mt Pilchuck is about 5200 ft as shown here. Check out the new "Terrain" key mode on the map (upper right) - it was recently added at my request.