Mark Lerman, has pioneered a method of PCB Toner Etch Resist, using "Laser printing directly on to PCB" for Homebrew construction. This is similar to Toner Transfer Method, but without the difficult error-prone intermediate step.

Update: Mark has abandoned the high(er) voltage modification and said it was not necessary, see his updated documentation.

He plans to document his method as he solidifies elements of the idea.

As someone mentioned on the mailing list; "Direct Laser Print to PCB" is the "holy grail" of the Homebrew PCB Toner Etch Resist Method.  Hopefully it can be perfected.

This is going to be a very interesting project to watch.

SM-3T Microscope Is On Order

The SM-3T Microscope is on order, I had to pay more than I would like, but it will be a great addition to my Shop.
As accessories, I also ordered the 144 LED Lamp and the 0.5X Barlow (auxiliary objective) lens.

The Microscope will also be used for many things, and not just for building Homebrew SMT electronic projects,  .  .  .  or at least that is the way I justified the purchase!? :-)

Soon, you may see photos on this blog via this Microscope!

I am still setting up my Shop in the new location, and progress is slow, but soon, I should be able to find things again.

My order of 0603 SMT Resistors was just received - 15 days after order and I will NOT complain, because getting the little package from China was almost as much fun as getting a coveted DX QSL.

The return address was all in Chinese except the words "Guangdong Province, CHINA", and what looks like a routing sticker - has the words "PAR AVION" which I think maybe says "Air Mail".

Along with the Resistor, they sent a very nice note, thanking me for the order and sent along two interesting small Bead String "Chinese Style Gifts with the meaning of 'Blessing You' ". When was the last time your part supplier sent you a gift? I will add a photo of the Gifts to this blog when I have time.

The parts arrived in sorted-value labelled small bags - while holding the bags up together, the content looks like a little kids collection of silvery beach sand - the components are not on tape.

My plan is to find a divided plastic box to hold the small plastic bags - I do not think letting the resistors out of their bags directly into the divisions would be a good idea.

I do not think I have every had 5000 5% resistors before, especially in such a small space, they will very nicely complement my 0805 SMT Capacitor Kit.

Now all I have to do is "Finish Moving" and set up my Shop enough that I can start on some over due fun projects.

My Seattle QRSS Grabber is Offline - and has been for sometime.  In an effort to bring the Grabber back online and make some changes to stabilize its operations - I managed to almost kill the computer. The computer is remote and therefore most system admin is done with a program called "VNC", which is a remote console control program.

When things go wrong at a distance, . . .  they really go wrong - in this case I inadvertently removed some of the Gnome Windowing system, so I can no longer access the console window from remote.

Just to check on things, I went to the server (physical) location and tried to repair the damaged Gnome Windowing system. After lots of "futzing around" I have decided it is best to just re-install/upgrade to the current release of Ubuntu - which I think is 10.04.

Unfortunately, I will not have time to work on the system for a while.  I will do some planning and will download the install/upgrade Ubuntu CD's

Until then - No Seattle Grabber - Sorry!

A Need for Magnification

For my continued work on very small Homebrew SMT projects, I am considering a real 3D Boom Microscope, so far I have used just an office "light ring with magnifier".

On the Internet there are many varieties of microscopes and vendors to choose from.

I think I want something with 7-30 zoom, and a camera mount/port would be useful for blog photos.

Currently I am looking at the Model SM-3T at about $350, has anyone used this model or does anyone have any other ideas or suggestions?

Email ThisBlogThis!Share to TwitterShare to FacebookShare to Pinterest
Labels: Microscope

Today I received my order placed with ebay for a 0805 SMT NPO Cap Kit (see previous post), the order took about 10 days to arrive.  The caps were received in a single small plastic bag, on marked value tape strips. Another plastic bag contained yet smaller plastic bags to put each value tape into it's own bag - what a pain!  Fifty four values and only about 30 small bags (there should have been 54, I was short shipped - but no big deal).

The problem was sorting the values and stuffing the little bags.  OK - I ask for it - I wanted to work with smaller parts for all of my HomeBrew projects.

Normally I use just a few values of components within a project, with this Cap Kit, I will have lots of values from which to choose. But I don't think for my projects (and typical frequency used), selecting a 1.5pF  vs 1.8pF will make much of a difference. Over time I will expand the Kit with single value bulk order of standard values that I will typical use.

What is truly amazing is that the 540 capacitors in this Cap Kit fit into a small 3x5 inch plastic box (with room to spare). A decade ago, I maintained large containers of parts, just so that I "might" have the right part for a project.  And now, my 0805 NPO Cap collection, fits into my shirt pocket.

One note about my recent move, I have spent many hours changing my post mailing address to my new Shop location - this Cap Kit order reminded my that I am not finished making changes. The order was shipped to my old address, because my eBay (shipping) address was not one of the address that I changed. Before I began my move, I started a list of places where I would have changed my mailing address. But, long after I thought I was finished make changes, the list continues to grow.  Do yourself a favour; start your list of your online eLocations soon. I am sure your list will be much longer than you think.

Email ThisBlogThis!Share to TwitterShare to FacebookShare to Pinterest
Labels: SMT

Jeff's Second Visit to my Hanger/Shop

Yesterday, I had a fellow HAM "drop by" my Hanger/Shop - Jeff - KO7M.  This was Jeff's second visit to the Shop, But this time he flew in via his Piper Cub! 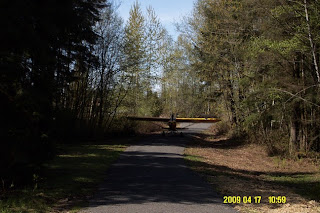 A Repeat Visitor to My Hanger/Shop

It was grand to see Jeff and his airplane, it is immaculate, extremely well maintained. 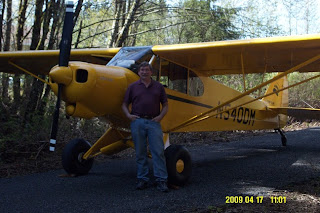 There is still to much brush to try to taxi up to down to the hanger, as seen in the background below, as it was, we had to bushwhack a little on each side of the drive, just to let Jeff return to the taxiway. 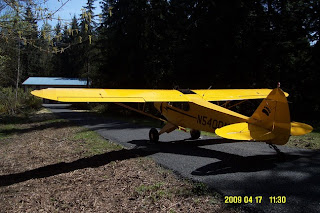 This is only the second airplane that has ever been on my hanger driveway, only my own C-182 RG (about 15 years ago) was the other.

We did not do much HAM Radio work while Jeff was there, but the event was made possible by a mutual enjoyment of HAM Radio, as we met about a year ago as a results of each listening to;  Bill - N2CQR - of SolderSmoke Podcast fame.  Thanks Bill.

Because I have now moved my Shop to the airport, I have plans to re-kindle my interest in flying - and maybe, just maybe, you will hear me on 30m QRP CW as - WA0UWH / AM from a knee key! 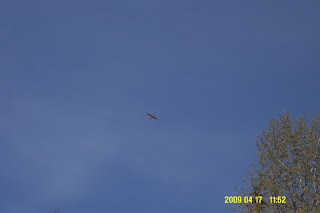 Jeff's Departing Wing Wave
From maybe 2000 feet above
It is not CW, but universally well understood!

I got to thinking about the "Wing Wave" - it has probably communicated more "welcomed information" than any other used message format (and for it's duration) than that which has ever been used.  And, it is perhaps the most universally understood - regardless of the pilots language or actual intended message. In a disport situation this is the message that I would want to receive.

A visitor to the Shop/Hanger

Jeff - KO7M - Found his way to my Shp/Hanger today. He help put up an experimental High Bay Light via the forklift, see my other blog http://HangerShop.blogspot.com

Jeff is NOW a qualified Forklift Operator, or at least I trusted him enough that I was the one up on a pallet at the 21 foot ceiling, installing the light. I have a "man basket" for the forklift, but it is hid in an inaccessibility corner of the Shop at the moment.

Afterward installing the light, we talked about new antennas for the Hanger and what we might do for Salmoncom this year for the same.  I have a commercial 40/80 meter rotatable Cliff Dweller Dipole that would be fun to put-up about 20 feet at the next event this summer - I will have to see if it still works.  It is very old, about 45 years old or so, but is in good shape.  I checked the WEB but could not find information on it. I will have to check for a name plate.

We installed a new PCB generation program on Jeff's laptop, I have been watching the development of the program on the WEB, the program is called "Autotrax DEX". I would normally install it on my computer. but I use Linux (Ubuntu) for most things.  Autotrax only works for MS systems (and it does not work with Wine on Linux),  I will just have to wait until I have more time to build a MS system. Everything I have read and seen (via tutorials) make AutoTrax look very good - the Yahoo forum is very active - the developer providing new capabilities and feedback every day.

I hope to use AutoTrax for a HB project - soon.

Thanks Jeff, for the help!

OK, I am Now Back, to do some HomeBrew (HB) project planning.

I currently have many 1206 size SMT parts, but in my effort to build ever smaller future HB projects, I just ordered a SMT 0603 Resistor 5% Kit and a SMT 0805 NPO Capacitor 5% Kit from eBay, the price seemed reasonable.  I would have liked the 1% tolerance kits, but the price was much higher. The kits are sold and shipped by "NightFire Electronics".

I will not have time to use them for a few more weeks, but I just had to get my "HB FIX" - to keep me going.

I am almost finished moving my Shop to my Frontier Airport Hanger (Grid: CN88xc), things are a mess, power is not hooked up to many of the tools, useful lighting is not installed - yet, but it will get better with time.

I forgot, I also ordered some SMT 0603 Super Bright Yellow LED. These will be fun to use in future projects.