QSO's and Camping with Nephews

On Monday, Tuesday and Wednesday I went camping with four Great Nephews, it as a good thing my sister went along to keep us civil.
The weather was warm on Monday when swimming and river activities occupied the day. On Tuesday, mist (light rain) and cooler weather kept the boys inside the tent with Lego Projects. Wednesday's weather was little better and outside activities resumed.

I brought along my FT-817 and new BuddiPole. We were camping on the river at 1200 feet elevation with high mountains all around. I did not expect much success. But I had a few QSO's from around the West, and I snagged a 59 report from N5S - the special event stations commemorating the Last Space Station Launch. 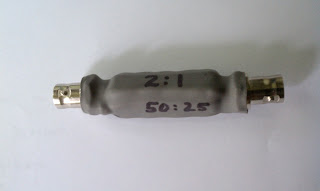 I configured the BuddiPole as a Vertical, as Chris - W6HFP and I had done for Salmoncon (see previous post), with the exception I did not have a TRSB (Triple Range Switch Balun) as Chris lent me for Salmoncon. I tried to order one for this camping trip, but the web page indicated (in error) they were out of stock. So, for the trip I created a temporary 2:1 balun with a Binocular 43 Core which worked very good (I will post more info later).

There were about 44 people in attendance, the weather was great, there were many good conversations, good presentations, good radio contacts, and good food.

Free Part Swap tables were set up for exchange of parts for personal projects.

There were many; activities, projects, helpers, YLs, supporters, attendees and some young Harmonics, only a few details are recorded here. For more complete details see Wayne's Yahoo Group write-up.

Wayne - NB6M, performed the Master of Ceremonies (MC) function and kept us all on schedule for special events.

In the past, Dean - N7XG has provided Solmoncon Name Badges, and new ones this year for everyone that requested them.

Time was allocated for spontaneous group discussions and radio operation.
Rod - KE7X provided the launch for some of the antenna in the trees.

Lyle - KK7P and Rich - AC7MA were there with the Elecraft KX3, for presentation, demonstration and available for anyone to try.

Steve - wG0AT was there; with an interesting presentation and previously unseen videos of the Rooster and Peanut. Steve put the KX3 to good use, on the air, as reported by Dave - AA7EE on his blog.

Chris - W6HFP, the owner of BuddiPole, was there and spent time with me configuring and adjusting my BuddiPole for a non-standard Vertical Configuration on 20 and 40 Meters with two Ground Plane Whip Elements at 22.5 Degrees. Chris lent me his TRSB (Triple Range Switch Balun) which provided a perfect 1:1 match.

The two breakfasts were Provided and Cooked by Curt - WR5J (of West Seattle Amateur Radio Club) and Bill - N7AOB of our local pQRP group.

Very good food and drink the first thing each morning!

Most other meals were potluck style, with lots of choices and snacks.

Doug also arranged to have K7S as our special event call sign.

Doug, Rich, and Thom were the big contributors to the Free Parts Swap tables, some parts were from; industry, personal collections, and other from local SKs.

The Technical Presentations and Several Group Discussions were enjoyed by all.


Thom - k7FZO and Teena of Valley Camp helped with most of the Activities.


For my part, I provided Soft Drinks, and then did a Toner Transfer Demonstrations, with the help of unsuspecting volunteers; Alan - K6ZY, Thom - K7FZO and Rich - AC7MA. Note: the upper right of the photo, the second Surface Mount (very old, 500 watt) Soldering Iron !


At my tent, Jeff - KO7M and Bob - AD7BP - helped me setup and configure a new Signalink-USB Adapter for some FT-817 fun.

The IC-730 and FT-817 Stations were powered by a single deep cycle 12 Volt Auto Battery.


And of course, Tess (my dog) provided Security and Leash Line Entanglement around my camp site.

Email ThisBlogThis!Share to TwitterShare to FacebookShare to Pinterest
Labels: Salmoncon

Today was a nice Warm Pacific Northwest Day, I had a few errands to run. While out and about, I decided to take a trip to the mountains; Green Mountain and Mt Pilchuck, they are only about 30 minutes away. My goal was to get high enough to work some of the locals on 6 meters, and just maybe work someone outside of the Puget Sound area. My three favorite operating vista's on the mountains are all about the 3000 foot level.

After leaving the highway (at a low 1200 foot elevation), and now on a dirt road, I put up my long whip on the Hustler HF Mount on the top of the VAN. The long whip can take the occasional whack of the low hanging tree branches over the mountain dirt roads. I was immediately encouraged, I could hear several QSO's on 6 meters, a sign of good things to come when I get to higher ground.

The ride up to the first vista is about 15 minutes and 6 miles. My VAN's ignition noise obliterated the QSO's as I drove (I really need to fix that).

At the first location on Green Mountain, I did not hear anything on 6 meters while still connected to my VAN's whip, but I set up my BuddiPole as a 6 meters dipole. Surely I will hear something? This location (North View) was not my goal, but I had to settle for it as the slightly higher road was still blocked with snow, as shown in the photo.

But, NO, nothing on 50.140mHz or any other freq on 6 meters. I was high enough that if anyone was on 6 meters in Puget Sound I would have an almost  line of sight path to their QTH.

I had some luck working the other bands and I retried 6 meters off-and-on for several hours. but still nothing on 6.

I could hear and work most of the 2 meter repeaters within the Puget Sound area, but that was NOT my goal.

I packed up, proceeded to the second vista at the upper parking lot on Mt Pilchuck which has a North-Northwest view and about 5 miles away (as the crow fly's). But, NO, still nothing but bugs (for some reason there is always lots of bugs there?).

On this Forth of July weekend, the parking lots on the mountain were full of cars, I am sure the high land trails were very active. The snow looked spotty above the parking lots, with most upper ridges clear.

Again, I packed up proceeded to the third vista with it's line of sight, 220 deg view of Puget Sound, surely someone would be on 6 meters. But, again, Nothing, Nada!

So, I got Skunked on 6 meters today.

But I had a great time out in the sun, and on the mountains with Tess, and we had fun talking with the many hikers along the roads. Tess is very much a people-dog, but she really enjoys being out with all of the playful kids.

Note: I just discovered there are "two" Green Mountain's which are near each other (25 miles) in Washington, shown on the map link each at the end of the connecting line. The one that I frequent is the lower southern mountain.