Paul - the creator of the Teensy has provided a software update (Rev 1.04), that fixes the clock problem that I observed (see previous post) After a 24 hour test, my Teensy has only gained about 1 second (as compared to a wall clock) that is only about 11 ppm error, which is good considering ambient temp and generic 16mHz cpu crystal.

Another test with a known good reference clock is necessary for more resolution.

Thanks Paul, for your efforts to provide a fix.

I had some time this morning to install the headers on the Teensy Programming Shield which I just received from the FAB Shop (see previous post). With plated through holes, soldering of parts (headers) is much easier than experienced with Homebrew double sided boards.

Monday night Jeff - KO7M and I attended the 7-11pm  DorkBotPDX meeting in Portland, there were many projects available to review and interesting people to meet.

An unexpected pleasurable encounter was with Paul - the creator of the "Teensy", which is the cpu board that I have mentioned in previous posts (see search label: Teensy). Paul also, video taped some of the high lights of the meeting. My GUI Development Board and 9 Volt Micro Transmitters can be seen. 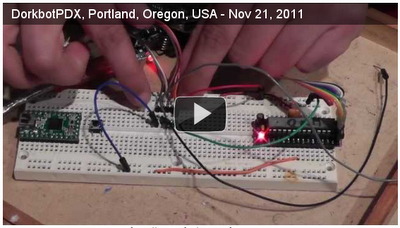 It was a great meeting, even thought I did not get back to Seattle and home until 3:30am, I plan to attend often.

The only time I have had to work on other projects was late a night. My Teensy (an Arduino work-a-like, see previous posts) has been giving me fits. The clock is FAST by about 24 seconds per 6 hours. All previous efforts to correct the problem resulted in No Change.  Jeff - KO7M and I had some time to review my progress (or lack there of) and found that the Teensy does not use the same Clock file (wiring.c) as used by the Arduino (I was modifying the wrong file), in fact it not even named the same under the Teensy directory structure (pins_teensy.c).

The Teensy Clock file is "pin_teensy.c", which is mostly written in Assembly Language. I unfortunately do not know Assembly Language well enough to make modification to attempt to correct the Clock. Jeff suggested we replace a section (the clock) with known working "C" code from Arduino.

The first attempt included a section to try to slow the Clock by an amount equal to the previously observed error. After 6 more hours, the clock was NOW slow by about the same amount as it was FAST before. Jeff suggested we remove the correction and obtain a new base line with just the "C" code installed.

Due to the work in the Shop (listed above) I did not get back to the Clock project for 29 hours. After 29 hours, the base line results indicated that the Clock was spot-on, only less than a second difference could be observed when compared to a wall clock. Wow!

But, the "C" code replacement did something to the "Interrupts" for the Teensy, my push buttons no longer work as expected. We damaged something by removing the Assembly Language code. More investigation will be needed.

For now, I have reverted to the Assembly Language Clock routing, so that all of my GUI development environment works correctly, but with a Clock that runs a little fast.


UPDATE: The new release of Teensyduino 1.04 fixed the problem.

The last few weeks I have not had much time for Ham Radio, Computers or Electronic projects. My Son and I have been working on building/Installing/updating new infrastructure for my Shop.
--
By: WA0UWH - Eldon R. Brown SR at 9:36 PM No comments:

Email ThisBlogThis!Share to TwitterShare to FacebookShare to Pinterest
Labels: Shop

After a little rework on the previous circuit board, we got it working. The +5V trace was broken at the header pin. This type of problem is always a concern with Homebrew Double Sided Boards as they are not through hole plated, and therefore must be soldered on the pads of the two sides. The pad and connecting trace are very fragile.

To make the board more useful (and rugged) we decided to have it sent to my favorite fab shop; DorkBotPDX. The boards should be back (in less than 2 weeks) by Thanksgiving.


The board has been changed a little, as the fab shop can do useful things, that are avoided when doing HB PCB's.