RPi as a WSPR Beacon with PA47

UPDATE:
Sorry,  this did NOT work as expected, the Wsprrypi code is still being developed. The second fork of the program is available. The RF output of the of the RPi is less noisy if the DC supply is from a well filtered source.

I have previously built my Homebrew PA47 Power Amplifier for a Propeller Microprocessor Beacons (see previous selected posts). The Propeller provides 12mW to drive the PA.

The Raspberry Pi provides about the same output power via the Dan Ankers Wsprrypi program. Therefore. it was a simple mater of connecting to the correct pins on the RPi GPIO Connector to give it a try. Thanks Dan !

Here is my initial lash up, with just a Low Pass Filter (LPF).
Here is the RPi and the PA47, with input and output LPFs attached. 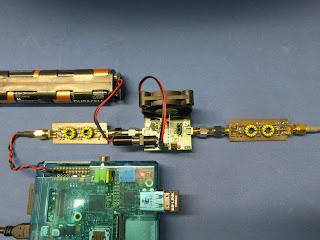 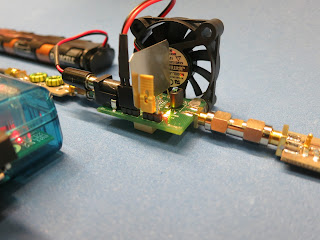 I have plans to modify Dan's Wsprrypi program to include other beacon modes (e.g., QRSS) similar to those that I have used with the Propeller Processor.

FYI, This my complete family of experimental PA47 Amplifiers.

On the air, WSPR Received Reports will be added here.

When written as numeric today's date is 3/14, is similar to 3.14, which of course is the value of the first three digits of PI.

Email ThisBlogThis!Share to TwitterShare to FacebookShare to Pinterest
Labels: PI

Rpi on the Network - Problem Fixed !

My Raspberry Pi is now back on the Network (see: my Rpi posts).

I now have an HDMI Display, and have fixed the boot problem. The Rpi needed a simple "manual file system check" (i.e., fsck -y /dev/<disk>).

Currently my Rpi is back on the Network as before at: http://rpi.wa0uwh.com:8040/

The Rpi maybe on-or-offline the next few weeks as I try different system configurations.

This is post is not about Ham Radio, but about something else that I enjoy - eating good food.


On Saturday, Mom would have celebrated her 89 Birthday. And for that, I decided to try to make some Biscuits, the way she has done so expertly many time for our family Saturday morning breakfast (which was such a long time ago).

Mom was famous for her Biscuits and Pies. Nothing in the Cookbooks came close to; look, taste and texture of her baked goods. Her Biscuits were almost three inches tall, and very flaky, soft and crisp on the outside, she would always say: “I don’t know if they’l be fit to eat!” - but they were always, soooo . . . very-very good!

Somehow Mom’s always got the volume of dough just right, regardless how many people were eating. We would end up with just the right number of Biscuits for each person, plus one more. The last Biscuit was made from the trimmings, left over dough from the cutting process. My brother, two sisters and I, argued over who was to receive the highly prized Ugly Biscuit. For most of my childhood, Mom cut the Biscuits with a Red Handle Donut cutter (with the center hole cutter removed), later she switch and used an easy available drinking glass to make the cuts. This was way back in the good’old-days. when calories were NOT counted, . . . but Biscuits were.

I have tried several times in the past forty years to make Biscuits. The first time was while Mom was still alive, but that did not seem to help. My Biscuits always came out like the dreaded Hockey-Pucks. In fact, in my childhood family, there was a running joke; there were only two types of Biscuits; Mom’s, and Hockey-Pucks. Somewhere along the way, my sisters, seemed to have learned how to make Biscuits, but I had not.

Lately, I have been thinking about Mom’s Biscuits, I think I have always had the ingredients about right, although Mom never really followed a recipe. She would say; put in some of this and that, mix it up, knead it with your palm, pat it out flat, cut the Biscuits, and don’t play with the dough. I think her “technique and style” was more important than the ingredients. Maybe, I had just NOT learned the "technique and style" part of making Biscuits.

As stated, I have been thinking about Mom’s Biscuits, and thinking about how fast she worked at; the mixing, kneading, folding, cutting, and the fast clean up of the mess. Now, while remembering, I can still see her work at each step, and that is what I am now trying to duplicate with my new Biscuit making efforts.

Mom would have pre-heated the oven to 350 degrees F, although she would never wait for the oven to reach the set temperature. Once in the oven, a timer was NOT used, the Biscuits came out of the oven about 10 seconds before we were to set down to eat. To this day, I do not know how she timed meals so expertly.

I do not have a standard oven, for my baking efforts, I have a rotating Pizza Oven, on which I have cooked almost everything - it works better than expected for an oven. I have used it to cook some very good Brownies. My Biscuit efforts will cooked on the Pizza Oven.

Several weeks ago, I first tried the Pizza Oven for Biscuits with what I remember of Mom’s Biscuit recipe, but as usual, I got Hockey-Pucks. The puck tasted OK, but Tess (my dog) liked the pucks better than I.

Now, with my new appreciation for Mom's “Technique and Style”, I am trying again, with much better results.

Mom's Biscuits were typically larger diameter (depending on the water glass she used as the cutter), for my first attempt my biscuits are smaller and leaned over as they cooked. For the next batch, I will find something larger to use for the cutter.


Note: the obligatory Ugly Biscuit in the center.

There will be Biscuits left over and saved for later.

BTW. this batch of Biscuits were pretty Darn Good, but not exactly how I remembers Mom's. A little more thinking and practice is needed.

Now, the mess needed to be cleaned up, this is something Mom would have done within seconds, after the Biscuits were in the oven.

Sometime today my networked RPi died, not sure why, but I will not have time to fix/rebuild it until later this week. At last count it had served web requests from 213 remote users. See previous post.

The RPi file system and log files still exists and can be mounted on another system for review.

I hope it was not Hacked!


UPDATE
The RPi is back on the Network as http://rpi.wa0uwh.com:8040/, but it maybe up or down depending on my experiments.

My Rpi is working very well (as shown on previous post). My many years of Admin'ing UNIX systems is paying off.

I have spent several hours / days configuring the system, building a web page, and playing with use ideas. I do NOT want to lose any of my efforts due to a dumb mistake or system crash - so a backup is needed.

Several backup strategies are suggested in the web forums, the most often mentioned method is; shutting down the Rpi system, and cloning the SD card. Which I think is a good idea - but maybe only once in a while. The size of my 16GB SD card and system interruption precludes doing this very often.

Most of the Rpi system is easily re-built from the original image, and most (if not all) other system additions are obtained from online software depots.

After building (cloning) the original SD image, and like most Rpi users, I expanded the file system size to fill the rest of the SD card. And then executed the following:


And, of course, I had to install "fldigi" for a potential radio connection.

Now, . . . I really do not need a full backup, just the backup important stuff. A very clever backup command is "rsync", which I have used many times on very large systems. Rsync can be installed as:


With the following rsync command,  I can backup a few important directories to another remote linux system, in this case a system called "shilo", from the local (Rpi) system is called "magpi". The directories that I want to backup are: "etc", "boot", "home", "root", and "var/spool/cron".


The nice thing about "rsync" is that the backup files are easily accessed via "scp" or directly on the remote machine. Also, re-executing the same command, will only transfer the files that have been changed. See the rsync manual page.