QRP Tests For The Night - Spoof

As most of readers of this Blog know, I have been playing with low power 30m QRSS Beacons (10.139945MHz) for several years. The current typical configuration includes a 9 Volt battery, a Homebrew PCB with crystal oscillator, modulator and timing control. The output has been measured at 43nWatts on a pQRP calibrated RF Test Set. Due to to temperature variation, the frequency stability, and timing was always a bit of a problem. 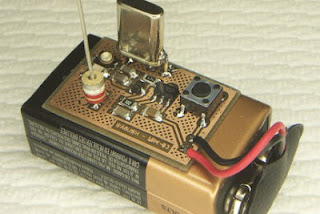 
Tonight for the first time, I connected one of the little Beacons up to my recently installed 300 foot Off Center Fed Dipole (OCFD), which is at 90' AGL (Above Ground Level ). I kept the 9Volt Battery as the power source, but connected the Propeller Microprocessor up to control the modulation and transmit timing control. Jeff - KO7M recently gave me some SMA connectors, which were used to connect the coax at the edge of the board. Thin jumper wires from the Propeller Microprocessor were soldered into the circuit to key the transmitter and control timing. Holding everything together was easy with the aid of Double Sided Tape.

The first contact was recorded on KK7CC Grabber in Las Vegas. The Slash Code CALL can be easily decode; forward slashes are "dots", and the backslashes are "dashes". 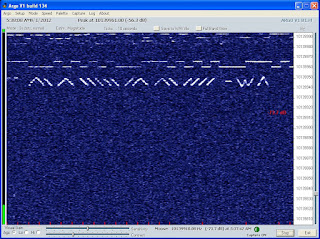 My Slash Code CALL as Recorded on KK7CC Grabber

Later in the evening, a weak signal was recorded in New Zealand on ZL2iK Grabber.

My Slash Code CALL as Recoreded on ZL3iK Grabber

Note: the faint delayed signal a few milliseconds later of the same data, it is probably the signal received via the long (reverse) path around the world at 17864.3 miles, the direct short path is only 6992.5 miles.

For specmanship, the long path is equivalent to:

OR, that is about

I think my recently installed (and well tuned) Antenna (thanks to Jeff's Help) provided the Effective Radiated Power (ERP) necessary to achieve these results. The gain in the direction of New Zealand must be extraordinary. Perhaps the slight slope (and droop) of the Antenna wire in the direction of New Zealand aids the radiation angle necessary to achieve around the world ionosphere ducting. I will have to verify the Antenna's expected performance with EZNEC.

I should have time to repeat this tests and results sometime in the coming year, but for now, other projects will divert my attention from this type of extraordinary results and experiments.

(Actually, there are a few "facts" within the post)

Email ThisBlogThis!Share to TwitterShare to FacebookShare to Pinterest
Labels: AprFools